The territorial characteristics knowledge and its evolution over the time is the starting point of its management optimization. For this purpose, the study process and the territorial planning are easily supported by GIS solutions (such as geographical database and territorial information systems), as well as by satellite data (historical and updated), especially for:

Large cities, as well as medium and small cities are affected by the territorial relevancy resources use and, above all, abuse. Therefore, the need to have modern and effective tools available to control urban expansion, territory degradation and analyze situations potentially at risk for environment and mankind is growing more and more.

URBAN EXPANSION
Urban areas multitemporal analysis, obtained by superimposing images of the same detected territory at different times, offers the possibility to highlight all the changes occurring during the years and allows to follow the urban development of a given area over the time.
The current law regulations stipulate that by 31 December 2003 all the Municipal Administrations are autonomous in their own pertinence Urban and Agricultural Cadastre management . 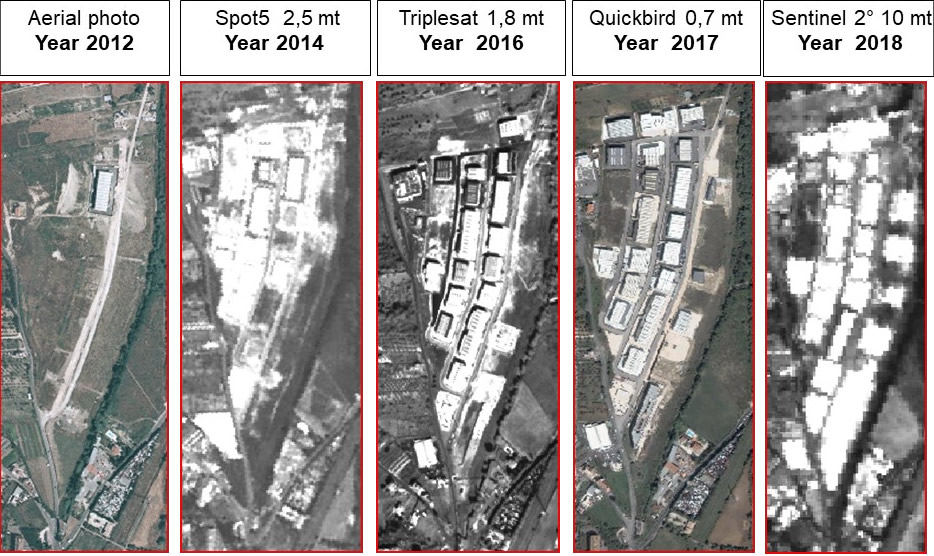 The problem of building abuses has always represented municipalities “Achilles’ heel”, because of the reliable documentation lack over the time, or the committed resources to manage the problem are scarce and scattered in the maze of public offices.
Today, such abuses control and repression can also become a derivative source of income thanks to remissions acquisition, amnesties and taxes derived directly and indirectly from these abuses.
The tools used so far to manage this problem proved to be of little use, in fact the
simple cartography, fundamental for many institutional and productive activities, is affected by a constitutional defect deriving from the methodologies used up to now for its production.
As a matter of fact, it is known how the official cartography is precise but suffers from the misalignment with the real situation, due to the scarcity of resources committed to its timely update.
Overflight images are expensive and are old by their very nature; the planes in fact fly
only periodically, at very high costs and with many constraints dictated by aeronautical authorities.
Satellite images, instead, offer a valid solution to these problems since the overflight is continuous and updating is therefore guaranteed, with much lower costs than any other solution. The territory images, remotely sensed by satellite, are used in this sense as a solution capable of promptly providing updated cartographic products coherent in its context, that is, capable of bridging the time gap between the urgent information need and the official reference information possibility. 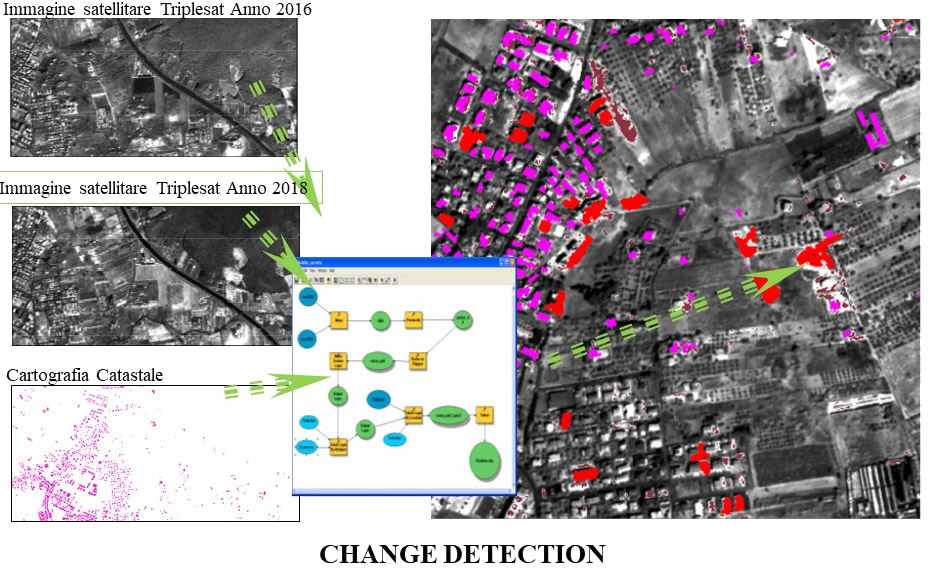 Change Detection is the technique of processing satellite remotely sensed images, of high resolution in this specific case, for the identification and / or discrimination of environmental variations over the time.
Iptsat is developing a semi-automatic system to analyze all theArcGIS for Server environment changes, through the study of classification algorithms to be implemented within the web-gis.
This research will favor local authorities, willing to join the project, developping activities more effective control and supervision of the area of  competence, at very low costs.
Our research target is to protect our cities and environment, providing them with a technical, rapid, economical and sustainable tool, selected among many innovations, in order to represent the Italian innovating companies at the World Expo in Shanghai 2010.