You are here: Home1 / High and Very High Resolution Data

Over the last few years, the possibility to employ scenes obtained through very high spatial resolution satellites has opened up further feasible applications scenarios on a very small scale, typical of local administrations and institutions. The created databases will represent a valid contribution to territorial governance activities, in particular by supporting topography activities, numerical cartography and photogrammetry, three-dimensional modeling, teritorial information systems Territorial and, above all, the Information Systems supporting decisions. 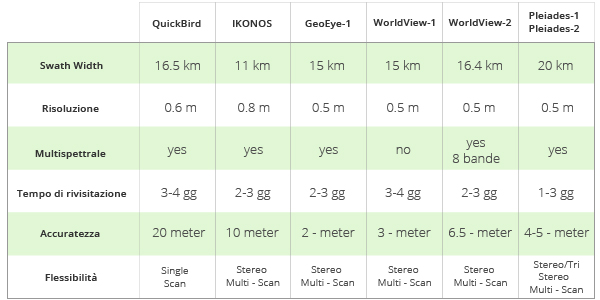 GeoEye-1
is a high resolution commercial remote sensing satellite for ground observation launched in orbit in September 2008. GeoEye-1 is equipped with a panchromatic resolution of 41 centimeters (16 inches) and a multispectral of 1.65 meters. It travels in an heliosynchronous orbit at 684km of height (425 miles) and 98 degrees inclination, with the equator crossing time of 10:30. The GeoEye-1 can store images up to 60 degrees outside the nadir.

IKONOS
is an artificial high spatial resolution commercial satellite: it was the first satellite capable of recording images with a resolution between 1 and 4 meters. It can offer both panchromatic than multispectral images.
IKONOS is able to get a ground resolution of 0.82 meters in panoramic mode (black and white) and 3.2 meters in the color or multispectral mode. These images can be fused together to create very high resolution color images.

WorldView-1
it is one of the most modern commercial satellites currently in orbit, equipped with high tech instruments for accurate geolocation and supplied by a panchromatic sensor providing images at a resolution of 50 cm. Launched in 2007, the sensor also acquires in stereo mode
with a high degree of accuracy; the stereo pairs thus generated guarantees
the extraction of Ground Digital Models (DEM).

WorldView-2
launched in October 2009, it is the first commercial ultra-high resolution satellite with 8 multispectral bands. Operating at an altitude of 770 kilometers, WorldView-2 offers a geometrical resolution of 46 cm in the panchromatic band and 1.85 meters in the multispectral one. WorldView-2 has an average revisiting time of 1.1 days and is able to collect up to 785,000 square kilometers images per day.

QuickBird
is an ultra-high resolution satellite, in orbit since 2001, it was designed to capture efficiently and with high accuracy large areas and is capable to acquire up to 75 million sq km of surface per year, provided with avery high resolution world catalogue data, updated with unprecedented frequency. QuickBird satellite data are suitable for all large areas mapping needs and can be used in many application fields such as territorial monitoring, prevention and natural risks management and change detection analysis.

Pleiades
are the first French dual observation satellites capable of meeting the needs of both European commercial and military users, with a wide range of applications, including mapping, urban development, hydrology, geophysics, volcanology, etc. This constellation is able to provide orthorectified color images up to 50 cm resolution, with a daily review time of any point on Earth. Furthermore the Pléiadi are able to capture high-resolution stereo images in one step. The image accuracy is about 3 meters, with a possible improvement – up to the exceptional value of 1 meter – with the use of GCP. Since the satellite was designed primarily for the emergencies management, the images request can take place up to six hours before acquisition. The satellite Pleiades 1A was launched in December 2011; Pleiades 1B in December 2012.

SPOT
The acronym SPOT refers to the French satellite series designed for the terrestrial resources study, the first of which was put into orbit on February 22, 1986. The SPOT images are able to satisfy geographical information needs in many fields: cartography, defense, agriculture, cadastral package identification, urban planning, telecommunications, environment. The images acquired by the sensors mounted on SPOT satellites are very useful as a source of information in order to study, monitor, predict natural phenomena and to direct programming activities, by supporting the decision making. The high resolution (up to 2.5 meters) makes the shapes and the measurement identifications of objects on the ground possible, allowing a medium-scale cartography creation (1: 50,000 /1: 100,000). With SPOT 2, 4, 5, and the new 6 and 7, (resolution 1.5 mt,) the SPOT mission has collected an archive of more than 30 million scenes since 1986.

Jilin Constellation
Jilin 1A is a Chinese satellite capable of acquiring images at 0.70m in the panchromatic resolution and at 2.88 meters in the multispectral one, with a swath lenght of about 11.6 km. The great advantage of this satellite is represented by the possibility of acquiring images in STEREO – TRIPLET mode, producing a DEM starting from 1.5 meters of absolute resolution. Another great advantage of this satellite is the extremely competitive cost

GF-2 satellite
The GF-2 is a Chinese satellite capable of acquiring images at 0.80 cm in the panchromatic resolution and at 8 meters in the multispectra,l with a swath lenght of about 70 km. The GF-2 can offer very high resolution images at the lowest cost on the market.

TripleSat
The triplesat constellation features 3 ultra high resolution satellites, with a spatial resolution of 0.8 cm and a swath per image of 23.4 km. It is a5 bands  satellite, one pancormatic and 4 multispectral RGB + NIR.

Planet
Planet constellation of over 200 different resolutions multispectral satellites, from 50 cm to 5 meters 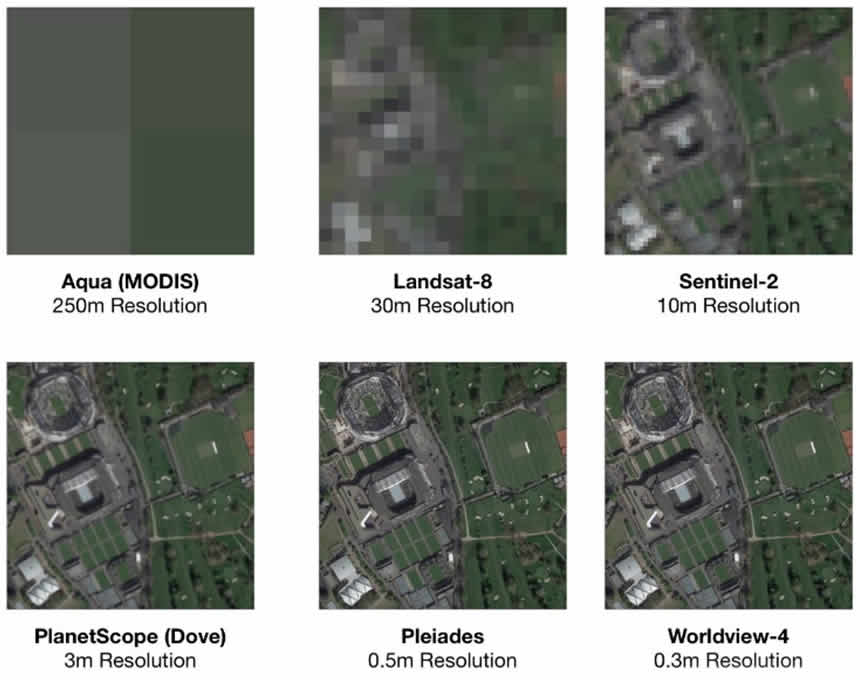 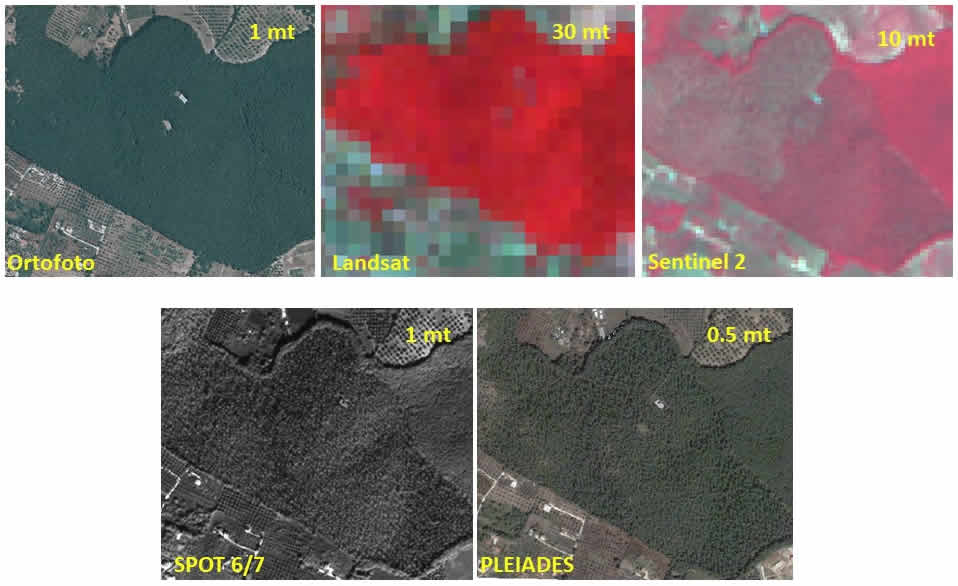